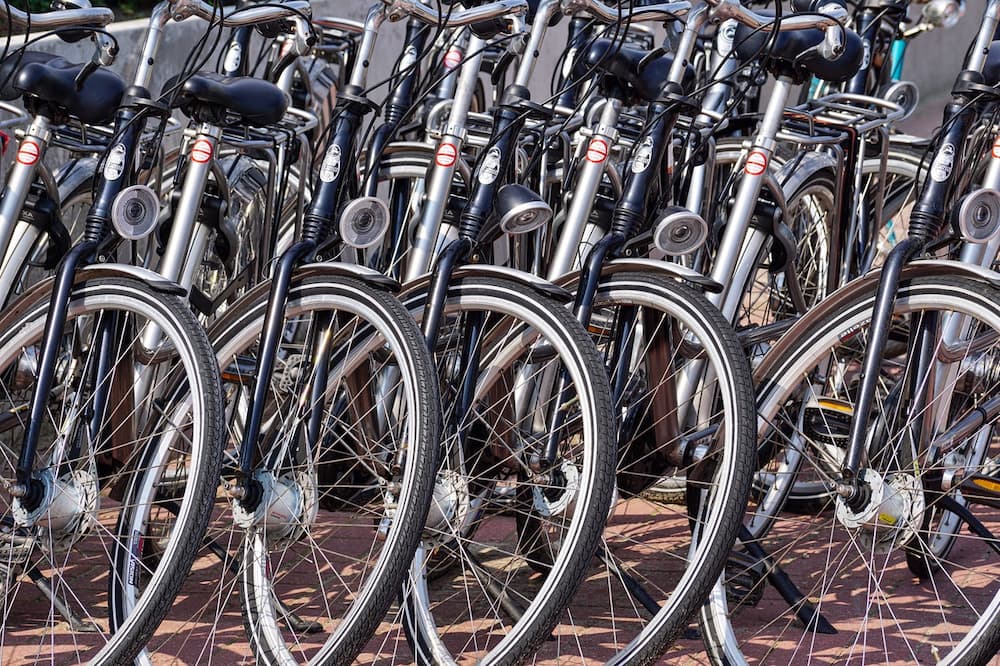 Many cyclists know the struggle of having to carry a friend’s bike when they already have to ride their own. In fact, sometimes you may even have to carry two bikes at once. In such cases, people tend to push them while walking.

However, this can only be done if the distance is short and when you aren’t running out of time. For long roads and strict time limits, there’s no way but to carry one bike on top of another.

How’d you do that? That’s exactly what we’re going to discuss in this article today. Let’s get started!

How to Carry A Bicycle on A Bicycle?

Although there are multiple methods of carrying a bike on another bike, not all of them are considered safe. In fact, if you’re new to cycling, you shouldn’t even attempt some of them.

The trick is to wear the bike like a backpack. Put one of your hands through the large triangle created by the tubes of the bike, and let the bike rest against your bike, while you grab onto the handle of the bike that you’re riding.

Another thing you should consider before going with this technique is the bike’s weight. If the bike is too heavy, it will wear you out and you won’t be able to travel a long distance with it. Even if you manage to do it somehow, you’ll be completely drained once you reach your destination. This is why we highly recommend carrying a bike in this method only when it’s lightweight.

Plus, if you’re new to cycling, you shouldn’t try this, as it’s one of the riskiest ways of carrying a bike while riding another and should be attempted by experienced cyclists only.

Related reading: How To Carry A Bike Up Stairs?

Grabbing by the Handlebar

Another popular way of carrying another bike while riding one is this. When you’re riding one bike, you can grab another by the center of the handlebar, raise the front wheel, and keep the rear wheel touching the ground. Make sure that the bike you’re holding is parallel to the one you’re riding.

Through this method, you’ll be able to carry the bike much more easily. It won’t take much effort as you won’t have to rest the entire weight of the bike on your shoulders. However, you’ll require considerable arm strength to hold the weight of the front part of the bike in one hand.

So, you shouldn’t attempt this if you don’t have enough arm strength. If you do so despite the shortcomings, you’ll only end up tiring your hand, and you won’t be able to carry on from one point. In fact, you may even suffer from muscle cramps if you push yourself too hard.

Even if you have what it takes, we highly recommend warming up your hands and shoulder before doing this. It may save you from muscle cramps.

Related reading: How to Carry a Bicycle on a Motorcycle?

You need to mod your bike if you want to carry another bike in this method. For this, you’ll need to create a customized part that you’ll have to install on the rear end of the rear rack of your bike.

There will be two major parts to the component that you’ll have to craft. Firstly, there’s the solid rectangular section that’ll be installed on the top of the rear rack. You can create this easily with rails that are used with windows and sliding doors. This will help you cut the cost.

Then, you’ll need to attach a strong metal arm to that. You need to set the metal arm in such a way that, if the top-end of the front tire of the bike is attached to the metal arm, you’ll be able to the rear-most point of the tire to the end of the metal arm.

Finally, you’ll need to strap another point of the tire to the chainstay of the bike you’re going to ride. If you attach three points of the bike that you’ll be carrying to the bike you’ll be riding, the front wheel of the former will be lifted a few inches off the ground. This will allow you to drag the cycle along with you without damaging it.

Related reading: How to Tow Bike with Another Bike?

However, this is the easiest and safest way of carrying a bike while riding another. To do this, we recommend getting a flatbed trailer from any online marketplace. You can go for the Burley Flatbed trailer as it’s quite durable and it’s easy to mod.

Once you purchase it, mod it by yourself or get it done by a professional welder. You just need to weld or attach a piece of long metal where you can tie the bike’s rear wheel. Make sure there’s a vertical extension at the end of the metal arm so the bike can be held straight.

The rest is pretty self-explanatory. Once everything is set up, attach the trailer to your bike, and strap the other bike onto the trailer. Now, you’re all ready to carry a bike on a bike!

Related reading: How To Carry Desktop On A Bike?

As you can see, there are different ways of carrying a bike on a bike. We understand that all of these procedures will not benefit you equally.

This is why we highly recommend that you consider them well before trying one.

How To Carry Bow On Bike?

How To Carry A Knife On A Bike?

Where To Put Keys While Cycling?