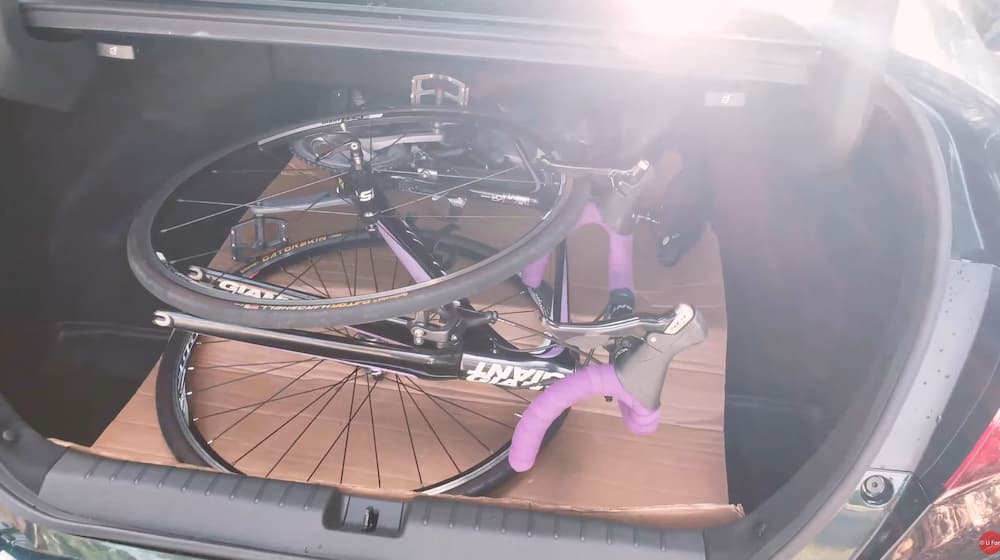 Cycling is a fantastic way to get away from the urban jam and get lost in the wilderness. But for many of us, getting the cycle to a place where we want to pedal can be tricky.

Transporting the bike inside your car might be a good idea for some. Although, carrying two bicycles in your vehicle is a daunting task. But the hassle is worth it if it means that you can spend more time racing down the mountain tracks and feel the air in your face.

Today we’re bringing out the question of your answer – how to fit two bikes in a car? Continue reading the article, and you’ll surely get the answer!

How to Fit Two Bikes in a Car

So, you want to know how to keep two bikes in your car, here’s how to do it. Obviously, you need a vehicle with a relatively large interior space. Fold down the rear seats. Then remove the wheels from the bike’s body while keeping the brakes in mind.

Then put it gently on the car seats while keeping the bike part that carries chains and other bits upward. Put two bikes vertically to protect the important components. Don’t forget to put the wheels in the trunk of your car.

In this section, let’s talk about the overall process in detail.

Clean up your bikes first

The first step you have to make sure is your bikes are clean and ready to transport. So fill up two buckets with water and put a good amount of soap in them. Don’t forget to keep brushes, sponges, and rags close to you.

Then what you need to is put the bike on a work stand, if you have one. Don’t worry if you don’t; you can clean up your bike perfectly fine without one. Then use a degreaser to remove greases from the chain.

After that, pull out those brushes and sponge and start putting washing liquids onto the frame and scrubbing. Be extra mindful with the tough spots, as they can be hard to clean up.

Take care of the rear seats

For longer bikes, it might not fit inside the space for those long seat rods. Pull them down and back the seats. Turn the screws or nuts that are keeping the bike seat up, and then push them down. They’ll get lower in the body and might save you some valuable space.

Remove the front wheels for the body

This might be tricky for some of you if you haven’t done this before. If your bikes have a rim or cantilever brake, you need to release the cable tension first. There’s a lever present in the caliper for rim breaks that will release some cable tension so that the brake pads get far enough for the wheels to slide past them.

Then flip over the bike because allowing the bike to rest on the handlebar or the seat will make the process much easier. If there’s a quick-release function on your bike, now is the time to flip the lever to open.

Then gently lift the wheel from the fork, taking extra attention to the calipers. For disk brakes, be very careful with the rotors while you take them out.

Don’t forget about the brakes

After taking the wheels out from the bikes, put some brake plugs on. If somehow the levers get accidentally pushed, it won’t mess up the alignment of your brakes. Also, put the bikes in such a way that the brakes don’t get squeezed during transportation.

Put chains on the small ring

It would be best if you put the chains of the bikes to a small ring for ensuring two things. The first one being the chains don’t break down or get bumped during transportation. And the second one is keeping the amount of grease spreading to a minimum.

Place the first bike on the seat

After being done with the following stuff, time to put your bike to the seat. But first, put some papers or soft clothes on top of the seat to protect it from scratches and dirt. Then gently pick your bike up and gently place it on the seat. Keep the left pedal locked at 12’o clock for maximum stabilization.

There’s a term for keeping the bike in the seat known as the ‘dry side up.’ This means keeping the critical parts of the cycle on top. Because keeping the on the downside will create extra pressure that can damage your bike.

Time to align the second bike

After you’re done with one bike, pick up the second one. The instructions are almost the same as the first one, but this time, rotate the bike vertically and put it on top. This will make sure that both of the bikes don’t clash with each other during transportation.

After putting the bikes on your seat, time to put your wheels safely. If you have a wheel bag lying around, then great. Put the wheels on the bag. When putting them on the bag, the cog side should be down to avoid spokes getting struck to the gear. Store the wheel bag on your trunk.

Alternatively, you can use the wheels as a cushion

Using the wheels as a cushion for your bike might be a great idea if you want some extra protection. After you neatly pack the frames on top of the seat, place the wheels for cushioning portions of the bike that might rock.

The whole idea is put gently put everything together tightly for the least amount of rattling or swaying. You might want to use the wheels as padding between the two bikes for extra safety, but that is totally up to you.

If you feel like they can poke or scratch your frame or wheels, it might be best for you to put them in a bag and place them elsewhere. You might pack everything neatly while using the wheels as a cushion, so the skewers remain in one place. Whatever you feel okay with, it’s entirely up to you.

Time to remove the bidons

These are actually your ‘water bottles that come with the bike. Make sure you remove them before proceeding. It might be a little thing, but an oversight like this could mean a problem during the transportation process.

Seatbelts for securing the frame

After doing all the hard chores, time to secure it all together by using the seatbelt. So you can be rest assured that even during a crash, your bikes will remain pretty safe inside the car.

Other Alternative Ways to Carry Two Bikes in your Car

Instead of keeping them in the seat, there are some alternative ways you can carry your favorite bikes safely from one place to another.

Actually, putting your bikes in the trunk might be a pretty compelling idea if you have a bigger-sized trunk. You can easily fit two of your bikes inside with a minimal amount of disassembly needed.

You need to take out two front wheels of the bikes and then safely put them inside the trunk. You might be surprised as to how little space you can squeeze two bikes if you have a trunk handy.

This is the traditional bike rack that most people prefer. The space on top of your car mostly remains empty and unused; why not use them for something useful? Roof racks provide you with a good way of transporting your bike from one place to another without compromising seat or trunk space. Most roof racks may require you to take the front wheel off for installation. But some of the newer models come with an extra arm for taking a complete bike.

Hitch racks are some of the more popular methods of carrying your bikes with the car. The hitch rack holds onto straps with hooks that enter into the edge of the trunk. The included padding on the hitch will protect the car from accidental scratches. The two arms can carry up to four bikes varying on the model. Aerodynamically, this is the most stable way for carrying the bike along with the car.

Some Important Things to Consider while Carrying Your Bike

Let’s go through some essential things that you have to consider while trying to fit two bikes in a car.

Get a larger sized car for carrying

You may carry one or two cars inside your sedan, but they might be harder to pull off. If you have to take bikes regularly to different places, consider getting an SUV or station wagon. This decision alone will make your life a whole lot easier.

Try to transport the bike inside the vehicle

If you can do it properly, then all of the tips below are not worth reading about. But this process might be challenging for some to accomplish. If you’re constantly going back and forth carrying your bike, it might be a better choice to bring a rack. But for infrequent cases, it is cheaper, safer, and you can keep the cycle at your eyesight.

Try to get a quality bike rack

If you’re on the road often and thinking about carrying the bike frequently, invest in a good quality car rack instead. A tray-style rack on the back of your car will make the carrying process more manageable and safer.

Keep your bike away from the car

When you’re carrying the bike in your car, the best thing is not to touch the vehicle at all if possible. Reduce the contact with the vehicle by putting cushions and sheets beneath the frame. Which, in turn, will keep both your bike and car in pristine shape.

Cover the pedal with paper or sheets

Make sure your pedals don’t rotate during the transportation process. Lock them into place by covering them with sheets of paper or cloths.

Keep your bike and car safe

If you carry your bike with a rack, don’t forget to lock the bike. There are a lot of accessories available for the frames to keep them safe. And always double-check your car doors before leaving them for the night.

Lube your bike upon arrival

After assembling the car once more, don’t forget to put lubricants on parts like the wheel, brakes, and pedals. They’ll act like regular bikes yet again.

Carrying your bike for long periods on the road might change the tire and suspension pressure. Double-check them after arrival and make sure they’re in working conditions.

Carrying two bikes in your car is not an arduous task to accomplish. Anybody can do it if he or she knows how to. The first disassembly and putting everything on the vehicle might be a little daunting, but we hope you can achieve it pretty quickly with our guide.

A bike rack is always preferred for short and frequent trips on the road but keeping everything inside the car will do too. With that said, now you know how to fit two bikes in a car. We hope you can put it to good use. Happy cycling!

How To Prevent Theft Of The Tailgate Pad

How To Carry Bike In Car